Another few days have passed and the VFW module is now ready for a first test out in reality. It supports all the same output formats as Avisynth 2.6 plus one more! (which you will probably never use) I have decided that the official extension for these virtual avi scripts should be .vpy. Think Video PYthon script to remember it. It was the best I could come up with that wasn’t used by something else as well. The VFW part has been tested with AVISource in Avisynth, MPC-HC and VirtualDub. Out of these VirtualDub is the only one that needs a small workaround since it detects the special compatibility mode based on file extension, you MUST SELECT the compat option in the File\Open dialog or it won’t open.

Of course there’s also a bunch of other changes such an installer that comes with all the needed runtimes, the usual pile of  Python module fixes and other things. Release early, Release often as the saying goes. My schedule is to try to make a new release every time I cross off something on the todo list.

I have also added a donation button. At least consider using it. Click on it once and then quickly close the window if you don’t want to donate anything. I will however never threaten to stop the project or anything else that’s close to drama if donations are low. 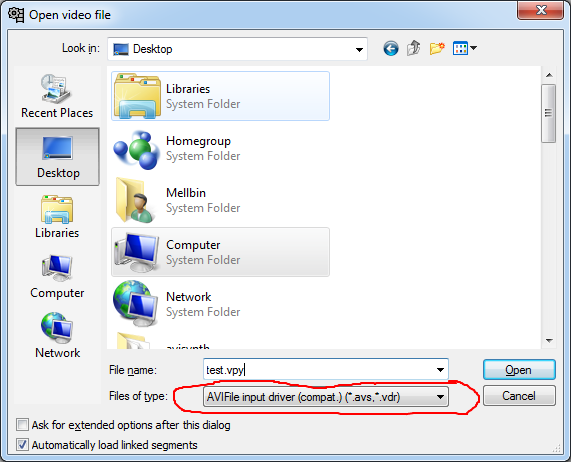 This is the big release. The new things are:

With this release I consider the API stable and the core mostly feature complete. So start writing and porting plugins!

What’s next on the todo list (in no particular order):

The title says it all, I hoped to have a bit more ready but this is at least a bit over halfway to my stated goals.

The big news is the addition of a function type. This allows some interesting things like this:

After almost 2 weeks of rapid improvement R7 is done. It mostly introduces more improvements for the python module, which now accepts unnamed arguments and has improved y4m output. The most important detail being the addition of a B value to the y4m header so it can signal higher bitdepths automatically too. Since it’s a minor change I hope x264, libav and other tools will adopt this property soon.

Another new thing that may interest some of you is that this build also comes with the header for developing your own plugins plus a the full source for all the functions in the std namespace (MIT licensed). I still have a few more things I want to add and revise before releasing the rest of the source to the public.

So instead of giving an vague “soon” as a release schedule for the source I will simply give you a list of things I want to finish before it goes out the door:

This time the release should be mostly usable for real encoding. Try it and report any crashes and avisynth plugin compatibility.

Here’s the first release. Have a look at the installation instructions to see how to get started. For anything else please comment in one of the threads linked to in the front page.